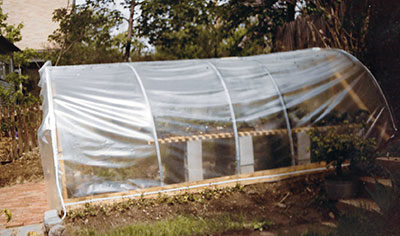 My first greenhouse in the backyard, Brookline, MA, 1983

In 1982, while driving in N.H., I saw my very first bonsai tree at a farmers’ market. Unbelievably, that changed my life—and within two days I was loading my VW Rabbit with bonsai trees grown commercially in N.J.

At that time, almost all ‘bonsai’ in the country were inexpensive small trees, mainly Juniper Procumbens, and I sold them door-to-door to florists around New England.  On weekends I would spread a tatami mat on the sidewalk in Harvard Square, and with my kids watching out for Benny the Cop, I would find a parking spot selling my bonsai on the sidewalk. People didn’t know what these beautiful things were and they would ask questions like ‘are they alive?’ or just exclaim ‘look at the little trees!’ It wasn’t until the movie The Karate Kid came out in 1984 that people would become more familiar with the word ‘Bonsai’, and then they would yell ‘BONSAI Miagi-san!’

I became completely absorbed in learning all I could about these little trees. Later that same year, I built a 12-foot greenhouse in my backyard in Brookline. I bought a cargo van and named my budding business Plant Man, as I continued going door-to-door selling my trees and other plants to florist shops.  In 1983 I opened my first store: a 400 square-foot space (without even a bathroom!) in Brookline Village. 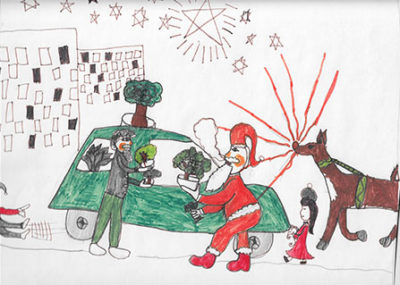 My daughter, 7 years old, made this drawing of Michael selling a bonsai to Santa in Harvard Square, 1983

I was going to name my quaint business Bonsai Village, but to my surprise every store in the area already had ‘village’ in its name, Village Cleaners, Village Diner, Village Antiques. I was disappointed but started considering other names, such as Bonsai America, Bonsai World, Bonsai Universe, Bonsai Galactic—and finally settled on Bonsai West.

In 1983 a brochure listing the names of some Japanese Bonsai nurseries in the Los Angeles area led me to California on a bonsai hunt. I had no idea that this little-known world existed: first-generation Japanese bonsai artists practicing their craft in their back yards.

It was a difficult time after WWII for the Japanese in California, as elsewhere in the country. They had just been released from internment camps and were struggling to make a living. Practicing bonsai became for many a cultural and social connectivity.

My first store in Brookline Village, 1984

When I first met these true founding fathers of American Bonsai, many were already in their 80’s. When I purchased many of these historically important trees back then, I couldn’t understand how they could part with something so special that they had grown for 30 years – but little did I know that now 30 and more years would go by with these trees in my care.

Bonsai West began to grow quickly. I rented a greenhouse in Somerville (we later brought it to Littleton, thus the ‘Somerville Greenhouse’). I hired a salesman, Wayne Schoech, a production manager, Hitoshi Kanegai, a retail manager, Teddie Scobi and eventually a young bonsai master from Thailand, Suthin Sukosolvisit.

My early employees included my good friend Dan (thus Dan’s greenhouse) and Sonia Valianos, David Babik aka “Dr. Bonsai” and a family from El Salvador who knew agriculture like the back of their hands. We moved to the Littleton farm in 1988.

I was still trying to find and define my place in the world, and tried my hand at wholesale, retail, flower shows, mall kiosks, vending at conventions, teaching, lecturing—all towards building my business. There weren’t too many bonsai business models to mimic, so I tried everything, including a short-lived but beautiful 2nd store on Newbury Street and another beautiful 2nd Bonsai West nursery in Pembroke, MA. 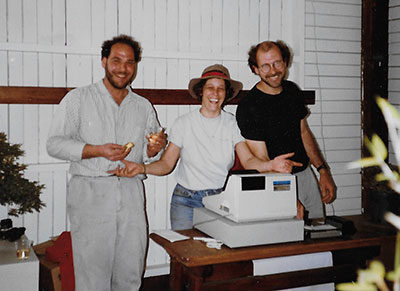 As the demand for small, mass-produced bonsai grew (“Mallsai” as they are known in the trade), my business began to feel out-of-control, with customers like Home Depot imposing their own terms, and me managing a wholesale route that stretched from Montreal, Quebec, to Washington D.C. We were regulars in seasonal malls and flower shows, and my life was a mess.

In 2002 after the death of my father I decided to reinvent myself and decided I didn’t want to be part of the rat race that I had entered. Gradually I scaled down and retreated into the nursery you find today: concentrating only on high quality trees has meant a high quality of life for me and my staff, and a high quality experience for my customers.

Bonsai West is now entering its 38th year in business. Like our old trees, the nursery (and I . . . ) are maturing and aging. Yes, it does get very tiring at times, but the beauty. . . . it’s what keeps me coming to work every day.